During my time as a graduate student at Stanford, the interdisciplinary nature of my PhD research has led to me being involved in a diverse array of projects. Underlying each is a desire to use geophysical methods to further our understanding of the planet and inform policy that guides our response to the problems of today while preparing for the challenges of tomorrow. 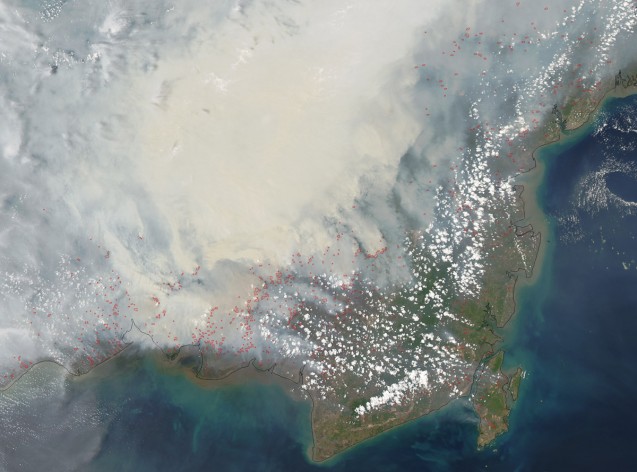 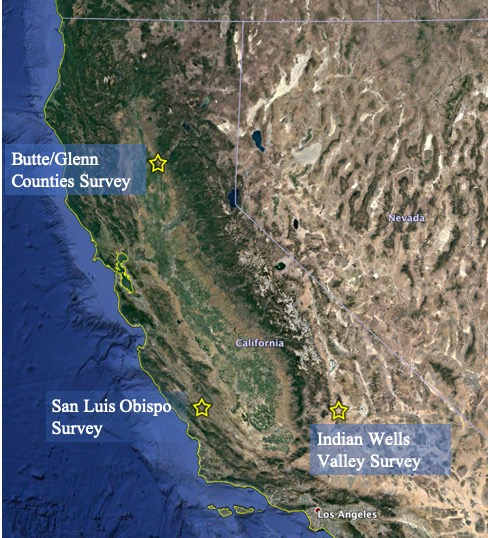 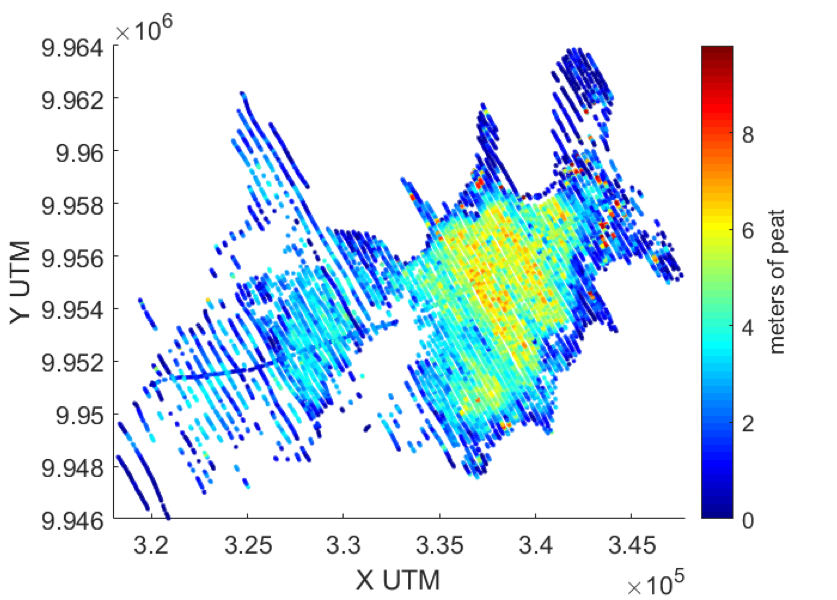 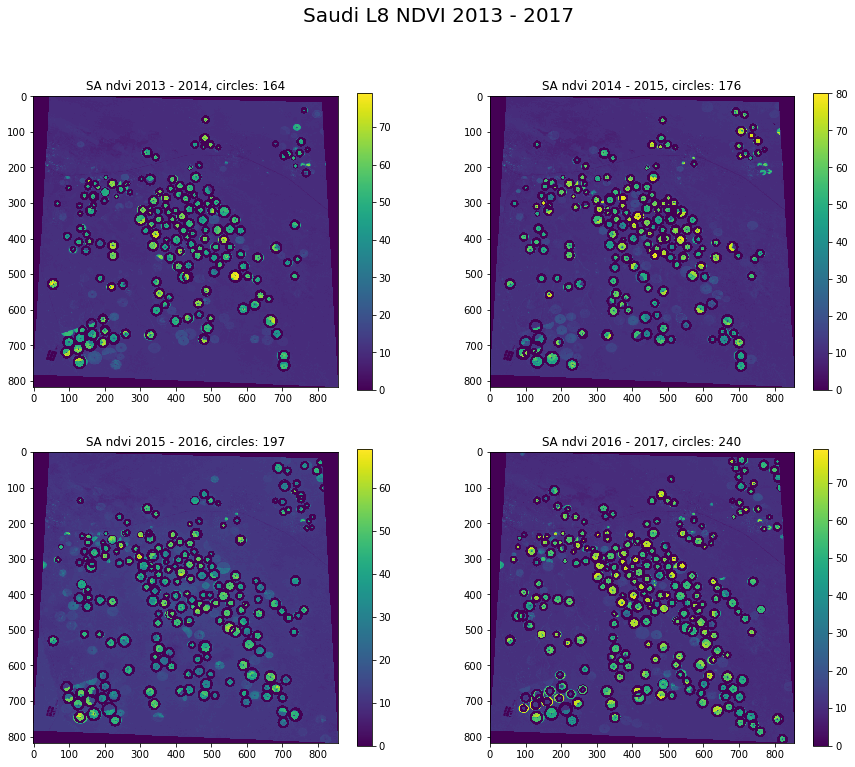 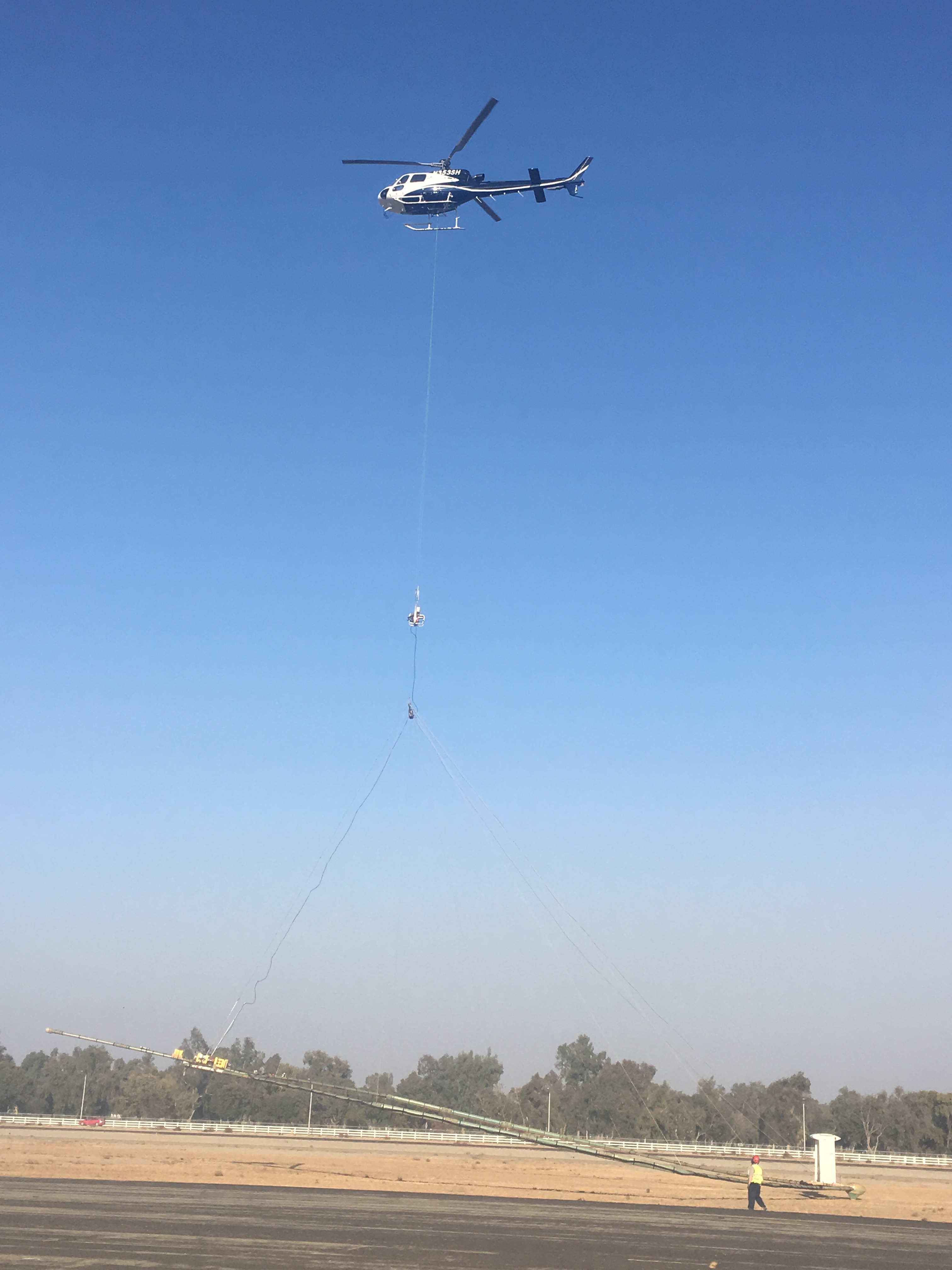 Degradation of peatland worldwide contributed 5% of global greenhouse gas emissions in 2006, with 70% of that figure coming from Indonesia. In 2016 the Indonesian government, with support from the Packard Foundation, announced a contest with the goal of developing a new methodology for mapping peatlands across the country. In support of a joint submission to this contest led by Rosemary Knight of Stanford University and Sonia Silvestri of Duke University, I conducted an extensive modelling investigation to see if airborne electromagnetic data could be used to map tropical peat thickness. I presented the results of this study to the scientific panel overseeing the contest and on the strength of my results, our submission advanced to the final round.

Link to article about our team making the finals. 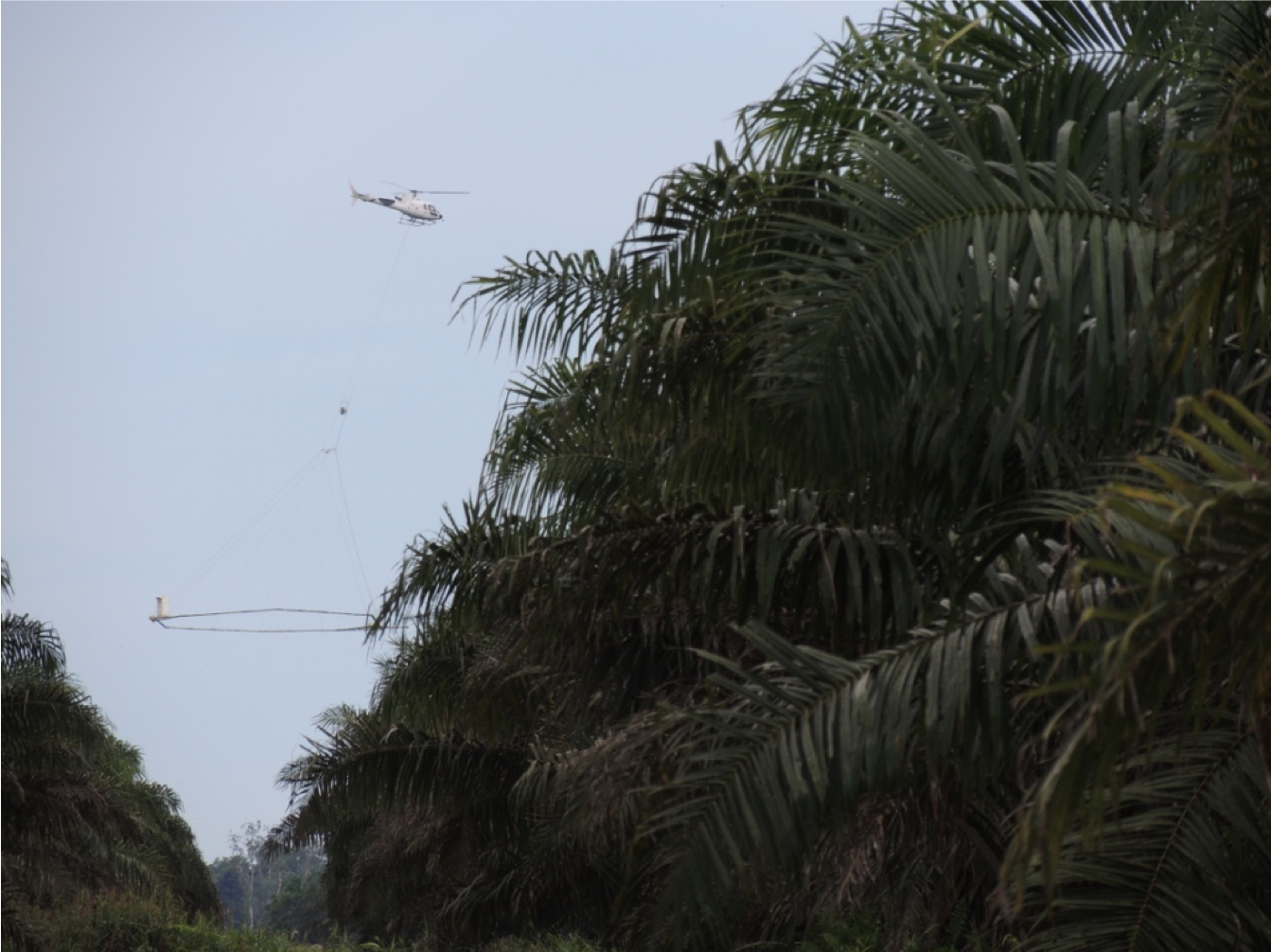 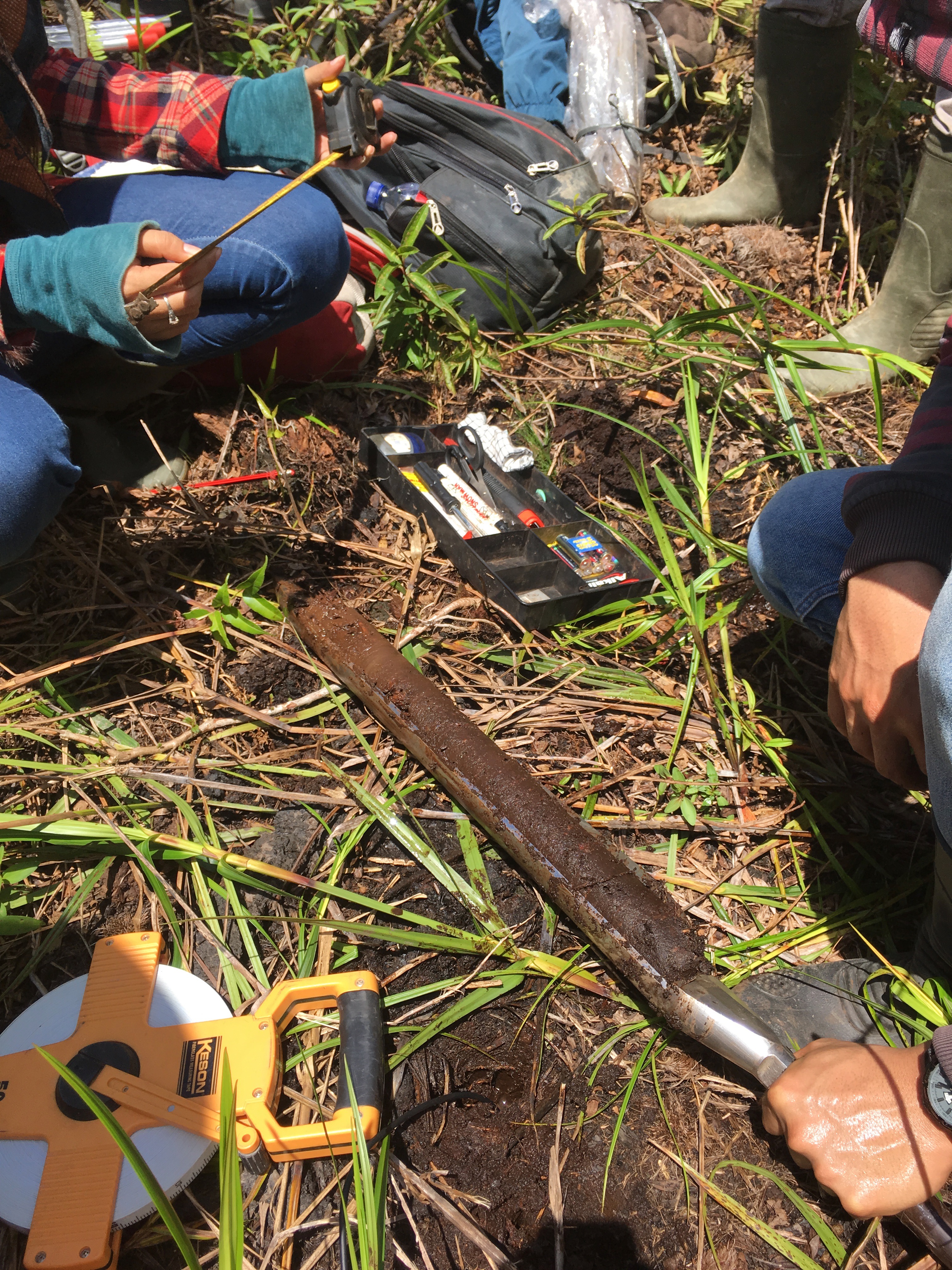 I then went to West Kalimantan, Indonesia, in November 2017 as part of a team responsible for the collection of peat cores to be used as ground truth alongside the collected airborne electromagnetic data. Our novel approach, that of using airborne geophysics to map peat thickness in 3D, was successful, and even though it was the first-time peat thickness had been directly mapped using remotely sensed data, our team did not win the peat prize. The results have been presented around the world at numerous research conferences and are currently accepted for publication.

Link to abstract presented at the 2018 annual fall meeting of the American Geophysical Union: A ground-breaking method to map peat thickness and detect the carbon pool of Indonesian peatlands. Link to oral presentation from the 2019 airborne geophysics workshop jointly hosted by the American Geophysical Union and the Society of Exploration Geophysicists: Inferring peat thickness in Indonesian Peatlands using Airborne Electromagnetic methods. Link to publication describing the method developed to quantify peat thickness with the airborne electromagnetic method: Quantification of Peat Thickness and Stored Carbon at the Landscape Scale in Tropical Peatlands: A Comparison of Airborne Geophysics and an Empirical Topographic Method.

Since the passage of the Sustainable Groundwater Management Act in 2014, the California department of water resources has been searching for new tools and technologies to aid in the monumental challenge of sustainable groundwater management. The Groundwater Architecture Project (GAP) is an ambitious program that aims to inform sustainable groundwater management policy in California through the application of geophysical surveying methods. A major component of the GAP is the construction of the optimal workflow for the use of the selected airborne geophysical surveying methods in the State of California.

My role in the project has been multifaceted. My PhD thesis involves investigating the link between subsurface resistivity measured with the airborne electromagnetic method and the information on sediment texture needed in order to model groundwater flow. The data collected from one of the pilot projects (shown in the figure above) in the GAP is central to my PhD thesis. I also act as a project manager, making sure that the various stakeholders and local water agencies involved in the GAP are all happy and that the field operations are successful. Beyond my PhD thesis investigating the link between resistivity and sediment texture, I have also used machine learning methods to reduce inefficiencies and improve numerous other aspects of the current state of the practice for how airborne electromagnetic surveys are conducted in the state of California.

Link to my research group's website with more information.

As part of a class project, with my teammate Aakash Ahamed, we explored the use of various machine learning models in order to predict year-end county level agricultural crop production from satellite imagery taken during the summer months. A wide variety of machine learning models (Naive Bayes, random forest, feedforward neural nets, etc.) were tested but convolution neural nets provided the best performance. The median test accuracy achieved with convolution neural nets was ~91%.

As part of the work completed for the Indonesian Peat Prize (described above), I developed a novel method for estimating physical properties directly from acquired airborne electromagnetic (AEM) data. Normally, AEM data are inverted for a resistivity model of the subsurface, from which other physical properties are then derived. In this work, I trained a three-layer feedforward neural net (NN) to directly estimate the physical property of interest, peat thickness, from the acquired AEM data. the training data consists of locations where the peat thickness was measured with ground-based measurements paired with the nearest point where AEM data were acquired. However, as this only result in several tens of training pairs, training failed.

In order to increase the amount of data available for training, additional training data pairs were constructed using randomly generated 1D models of the earth with variable peat thickness. The 1D earth models were then forward modelled to generate synthetic AEM data. The comparison between the generated synthetic data and the field data can be seen in the figure above. With the addition of this synthetic data, the feedforward NN was able to achieve accuracies similar to that from traditional methods involving inversion. The advantage to this new method is that a pretrained feedforward NN could be used to accurately estimate physical properties directly from the acquired AEM data without a time consuming, and thus expensive, inversion.

Managing groundwater sustainability in the face of climate change is a global challenge that has serious implications for food security in both developed and developing nations. One challenge facing sustainable management in developing nations is a lack of data on how much and where groundwater is being used. Transporting groundwater requires infrastructure, which can be expensive. Thus, irrigated agriculture is often grown in a circular pattern around wells, this is known as center pivot irrigation. One potential way to monitor groundwater usage around the world is to use satellite based remote sensing and machine learning to identify active center pivot irrigation and use vegetation health as a proxy for groundwater extracted.

As part of a hackathon held at Stanford University that was focused on big data and water, I investigated multiple methods of automatically detecting center pivot irrigation in satellite images. While my team was developing a machine learning approach using convolution neural nets, due to the time constraints of the hackathon, simpler methods such as Hough transforms ended up providing better results.

Geophysical surveying methods require a rock physics transform in order to retrieve the material property we want from the geophysical property we can measure. For airborne electromagnetics, this transform often links resistivity to lithology or sediment texture in the subsurface. The relationship between observed bulk resistivity and sediment texture is complicated and non-unique, tackling this problem is a central theme in my thesis at Stanford. As water saturation directly impacts bulk resistivity, in order to construct an accurate resistivity to lithology transform, the depth at which sediments become completely water saturated must be known. While well-based direct sampling methods can accurately map the depth to the water table, these methods generally lack the spatial and temporal resolution needed for constructing an accurate resistivity to lithology transform for airborne electromagnetic derived resistivity measurements.

As part of the research conducted in the groundwater architecture project described above, I developed a method that uses the change with depth in the distribution of resistivity observed with the airborne electromagnetic method to estimate the depth to the top of the saturated zone. The results of this method applied to a cross section of subsurface resistivity data are shown in the image above. The blue circles with white outlines represent the water level measured in nearby wells, while the dashed black line is the estimated depth to the top of the saturated zone. This novel method has been presented at multiple conferences and is published in the scientific journal Geophysics.

Link to abstract presented at the 2018 annual fall meeting of the American Geophysical Union: Estimating the Depth to the Water Table from Airborne Electromagnetic Data. Link to oral presentation from the 2019 airborne geophysics workshop jointly hosted by the American Geophysical Union and the Society of Exploration Geophysicists: Estimating the Top of the Saturated Zone from Airborne Electromagnetic Data. Link to the published manuscript on my GitHub, the official DOI is https://doi.org/10.1190/geo2019-0539.1.

I graduated from McGill University in Montreal with a joint major in physics and geophysics in 2012. After graduating I worked in ground-based geophysical surveying with Quantec Geosciences and then in airborne geophysical surveying with Sander Geophysics Limited. After travelling the world and running a variety of natural resource related exploration projects, I felt stagnant. I had learned all I could in my current position. I started applying to graduate programs while living in Barranquilla, Colombia and running an airborne magnetic and gravimetric survey. I was accepted to Stanford University in 2016 and immediately set about taking classes and learning everything I could while at the same time applying what I had learned in industry to the problems my research group was trying to solve.

Highlights from my CV: Graduated from McGill University in 2012 with a 3.51 GPA and a joint major in physics and geophysics. Three years of experience as a geophysical analyst and field crew chief with Sanders Geophysics Limited. Currently completing a doctorate at Stanford University with a 3.87 GPA. Fluent in English, Matlab, and Python. Competent in Spanish and C++. Years of leadership and coaching experience in club ultimate frisbee teams at both McGill and Stanford. Vice president of the Stanford chapter of the society of exploration geophysicists for three years in a row. Stanford classes include machine learning, computer vision, numeric methods, and deep learning with convolution neural networks. McGill classes include calculus, advanced calculus, ordinary and partial differential equations, and linear algebra.

Feel free to get in touch with me about potential interesting research collaborations, consulting or other work opportunities, if you like rock climbing or ultimate frisbee, or if you just want to chat.